Leap into a Pentecost playground

Oct 19 Posted by Alcina in Lifestyle 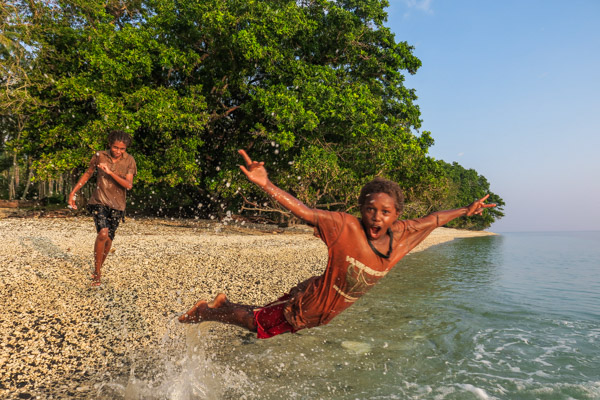 Ben Bohane visits the infamous Nangol land-diving ceremony but finds there is plenty else to do on this tranquil island, so stay a few days.

It is little Ernestino’s first season of jumping and his proud father is there to guide him.

This is an old tradition passed from father to son and now Ernestino, just 8 years old, is stepping up and taking the “leap of faith”this year. His father, Joanes Asal, is known to be one of the most experienced of Pentecost islands’“land divers”, a man who has leaped “hundreds”of times before he says with a big smile beaming out of a grey beard. This season, however, he is concentrating on teaching his son all about the kastom that inspired bungy jumping and is now famous all over the world.

They jump every Saturday during the months of April, May and June at Ransuksuk, and on this Thursday before the next jump, I trek up to Ranmil, their village high above the gentle sloping hill where an elaborate wooden tower with fastened vines stands as an annual monument to their culture of storytelling and courage.

Higher up on a mountain ridge we move along a steep jungle path and I see the forest floor covered with ripe pamplemousse (grapefruit) and mandarins, shaken down from trees during the recent cyclone. With such rich soils and abundant gardens, they don’t need to worry too much about the occasional storms - they are well used to mother nature’s bounty and her occasional blast. Further on I see chunks of white kava spread out on a bamboo table, drying in the sun. It’s another day of cobalt-blue sky and the view from here over the southern part of the island where it meets beach and sea is stunning.

“Come and I’ll show you the tree we use for making the tower”says Joanes to his son, after I have met them both in the cool, dark nakamal (kastom meeting house) inside the village. We move out into the dappled sunlight and down a rocky path until Joanes finds the right tree. I watch him caress the leaves and branches, explaining its significance to Ernestino. Later we find a different tree with spiralling vines - the vines they use to tie around their ankles when they jump. The vines must be the right size and cut at a particular time of year for their elasticity - their very lives depend on it.

Then it is a detour to the garden, where Joanes and a friend use a machete on a thick fallen branch to quickly fashion a traditional digging stick to uproot a yam, a large root vegetable that is one of their staples. In fact the Nangol season roughly follows the time of harvesting for the yams, which are usually planted late in the year and dug up during the jumping season.

Later on Joanes shows his son the weaved penis-sheath he will wear on his jump and the thick belt he has always worn around his middle. There are tabus involved in the preparation of the jumps which I won’t be privy to, likely to involve ancestral spirits, but for me and the tourists who make the pilgrammage to watch them leap from these towers, I don’t doubt they will need all the help they can get to step over the edge.

Are you scared? I ask Ernestino. After his eyes have quickly darted to his fathers and then back to mine it is a resounding “No!”His smile is emphatic but I can see in his eyes that this is not an easy thing.

Before I leave them in the nakamal that afternoon, Chief Remi and Joanes insist I have a shell of their stone-ground kava, which I have watched them and the other men grind into small pieces using a circular stump of coral to make it fine enough to then wring with water. I down the shell of brown liquid and soon feel the numbing sensation around my mouth and a pleasant feeling of relaxation.

It is time to ask Chief Paul and Joanes the story behind the Nangol.

“A long time ago we had a story passed down from our bubus (ancestors). One day a man and woman were arguing at home. She ran out and and he chased her through the jungle. She tried to escape him but he kept on chasing her. Eventually she found a tree which she climbed up to get away but still he kept chasing her. From the top of the tree she found a vine and tied it around her ankle and just when he was climbing up and getting close to her she jumped off the tree. The man immediately leapt after her but because she had the vine tied to her she sprung up from the ground and was not hurt, but the man fell straight to the ground and died.”

There is quiet chuckling around the nakamal.

It’s a curious story and when I watch it all unfold on the Saturday, as tourists fly in and gather at the base of the tower, I have a question to ask Chief Remi. Above the tower on a nearby dancing ground etched into the hill I can see the men in nambas (woven penis sheaths) and women in grass skirts singing and moving rythmically to the beat of stomping feet. They sing their encouragement - Weh! Weh! - to the divers as they step gingerly out onto the platforms from which they will dive.

“Since this ritual is based on a story about a woman trying to escape a man, how come it is men who do all the diving now and not women?”I ask.

Chief Remi just points to the women dancing in their grass skirts and laughs.

“We do it to protect their modesty!”he says and suddenly I have an image of a woman flying to the ground with their grass skirt also flying up…and no more explanation is required.

Many tourists come just for the day but having spent 5 days staying at a basic but charming guest house called Noda not far up the coast, it soon becomes apparent that there is much else to see and do around southern Penetcost (or Raga island as it traditionally known). Out front is a lovely beach with smooth pebbles and lapping sea, where I watch dugout canoes paddle past sunsets. Nearby are caves (one with an underground waterfall) and some spectacular waterfalls.

After watching kids play volleyball in the village I find young boys leaping from a waterfall nearby before my local guide Albert and Chief Paul take me on a mini adventure up a flowing river bed towards two other amazing waterfalls, about an hours’walk away.

These walks in pure nature followed by a sunset swim as the sun’s orange orb dips below the horizon remind me how much this tranquil island has to offer beyond the Nangol which so many have come to witness.

Stay a few days and you’ll understand why. 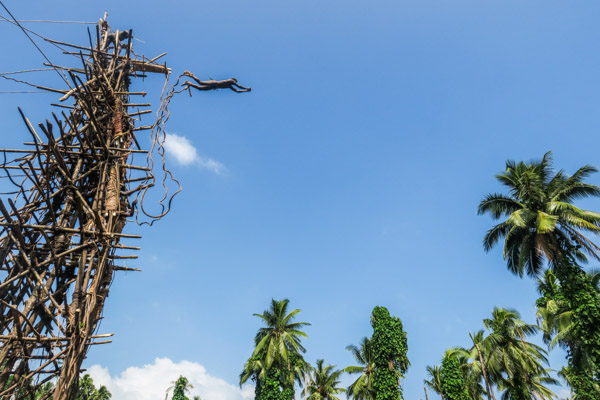 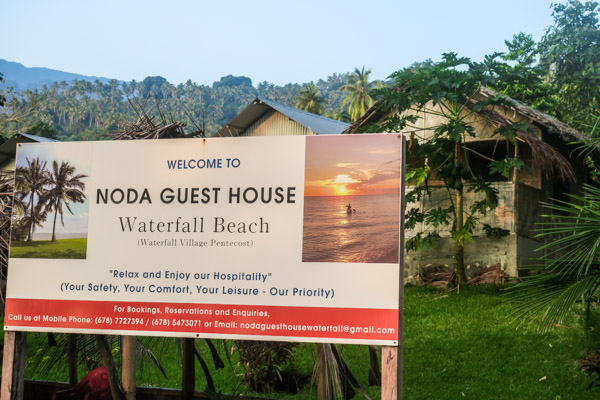